Showing posts from October, 2009
Show all

Based on my feelings about violence and our growing desensitization to it as a nation, there is no way I should have read and loved Neil Gaiman's The Graveyard Book as much as I do. ***polemic warning*** Since I began studying and practicing Buddhism several years ago I have become more thoughtful about and sensitive to media violence. The other night I popped in a movie, Brendan Fraser's The Mummy , that my kids and I had enjoyed watching in the past. Twenty minutes into the movie the level of violence and human suffering, even though it was was "fantasy" violence, became overwhelming and we turned it off. The combination of seeing the violence being enacted on and watching the victim suffer was just too much. While I am a huge fan of Harry Potter and own all of the movies, the violence in these seems a few steps removed, although it is increasing as the movies reach the end of the series. Somehow the wand waving and blasts that produce less visible
6 comments
Read more

And Another Thing... An Afternoon with Eoin Colfer 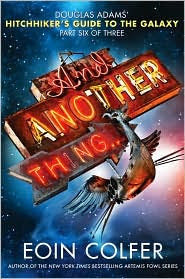 Let me start this by confessing that, prior to seeing the movie version from a few years back, I had not read or listened to any of Douglas Adams' Hitchhiker's Guide to the Galaxy books or radio programs.  However, my husband and son (the one who does not normally read fiction but has read this complete series) are fans. The happy coincidence of Eoin Colfer being asked to write Part Six of Three in the series (Douglas Adams died in 2001 while in the process of writing notes for the book) brought Colfer to San Diego on a book tour this weekend and we got the chance to listen to him speak - for a whole glorious hour in a very, very small bookstore- and get some books signed. Even though Colfer is here mostly to talk about the Hitchhiker book, he is happy to share stories about Artemis Fowl .  He started off his talk by commenting on the handful of kids in the audience and how he was going to read from the new book but there were a few swears in it so he wouldn't.
Post a Comment
Read more

Interesting Thoughts on the Portrayal of Parents in Some Recent Popular Picture Books... 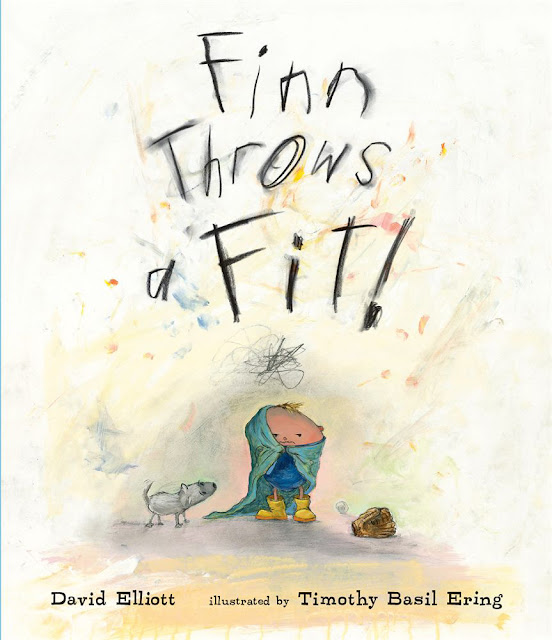 My uncle called this  New Yorker   article to my attention recently. For those of you who have been reading picture books out loud for the last decade or so, I think you will find it very enlightening.  In his article titled,  The Defiant Ones , Daniel Zalewksi, a features editor at the   magazine, takes a look at the depictions of discipline and the portrayal of parents in contemporary picture books.  As a parent who struggles to be disciplined and provide discipline for my children, I found it intriguing.  I am very curious to hear what the rest of you think about his perspetive and hope you will read and comment. Pictured above is the one book that he singled out for praise.   Finn Throws a Fit , written by David Elliott and illustrated by Timothy Basil Ering, published by Candlewick . For those of you who are interested, a podcast of a conversation between Zalewski and Rebbeca Mead, who wrote a very interesting article titled, The Gossip Mill , about the production com
2 comments
Read more 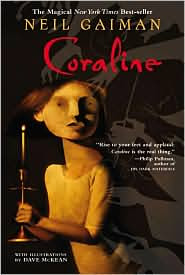 I read Coraline by Neil Gaiman in 2002 when it was first published it and it did not leave a deep impression on me. In all fairness, while I loved ghost stories as a child, scary stories are not my preferred genre. It took reading and listening to the phenomenal The Graveyard Book , sublimely narrated by Neil Gaiman, to nudge me to give it another try. I thought I'd make a week of it and read and review Stardust , which was originally published as a graphic novel with beautiful artwork by Charles Vess , but I am finding there are one too many racy bits (that are not in the movie, in case you would like to watch it with your kids) to make it appropriate for young readers. Coraline has been compared to Lewis Carroll's Alice in Wonderland , much as similarities to The Graveyard Book and Rudyard Kipling's The Jungle Book have been noted, and this is accurate to a degree. Like Alice, Coraline is bored when her adventure begins. And, like Alice, a talking animal, in
2 comments
Read more

Based on my review of Jeff Kinney's Diary of a Wimpy Kid books that posted on 10/12/09, I was asked to participate in an interview with Michele Norris , one of the hosts of the NPR show All Things Considered . First, Jeff Kinney was interviewed and fielded questions from kids, then I came on to talk about some of the aspects of the books parents might find unsavory. It was an amazing experience. I was so nervous I thought I was going to vomit, but Michele put me at ease right away and I was quickly rambling on like we were sitting at a Starbucks chatting over a cappuccino, which is exactly what she suggested I envision at the outset of our conversation. I have my local public radio station on all day when I am home and all the time in the car and have for all of my adult life. It has been a surreal, amazing, incredible experience to be asked to come on to this show that I have great respect for and speak knowledgeably about an aspect of my passion, children's liter
8 comments
Read more

Diary of a Wimpy Kid written and illustrated by Jeff Kinney, 224 pp, RL 5 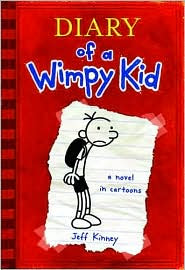 Originally started as a web comic on Funbrain , where book one can still be read for free, and conceived as an adult nostalgia piece, Jeff Kinney's Diary of a Wimpy Kid is a hugely popular series that has gotten kids, boys especially, reading. I almost didn't write this review because these books are so ubiquitous that I figured there were very few parents and kids who didn't know about them. However, after reading the first two in the series I thought that maybe I did have something of value to say about the series for those of you who are unfamiliar with it. *For an addendum to this review written after listening to an interview with Jeff Kinney in which he was asked some very pointed questions, see below. To listen to the interview before reading my review so that you can form an opinion of your own, click here . The diary keeper of the title is Greg Heffley and he is on the verge of starting middle school, which, in his opinion is, "the dumbest idea ev
3 comments
Read more
More posts