Showing posts from August, 2013
Show all

Wild Boy : The Real Life of the Savage of Aveyron by Mary Losure, illustrated by Timothy Basil Ering, 169 pp, RL 4 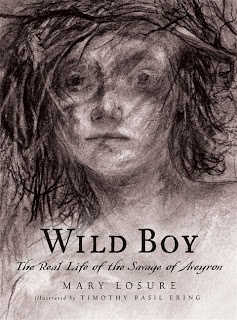 Wild Boy : The Real Life of the Savage of Aveyron, written by Mary Losureand illustrated by Timothy Basil Ering can be described as narrative non-fiction because it reads like a novel. Losure, who has worked as a longtime staff reporter for Minnesota Public Radio and a contributor to National Public Radio is also the author of another work of narrative non-fiction for young readers. The Fairy Ring: Or Elsie and Frances Fool the World, which was published in 2012, is the story of fifteen-year-old Frances and her nine-year-old cousin, Elsie. In 1917, the two girls take paintings of fairies that Frances has done out into the wilderness and photograph them in such a way that makes them look real. When their photos are randomly discovered by a popular group that believes in spiritualism, they are validated as "real" by photo experts and enthusiastically embraced by Sir Arthur Conan Doyle himself. Believers find it impossible to think that two working class girls could be responsi…
Post a Comment
Read more

A Monster Calls, written by Patrick Ness, inspired by an idea from Siobhan Dowd, illustrations by Jim Kay, 205 pp, RL 5 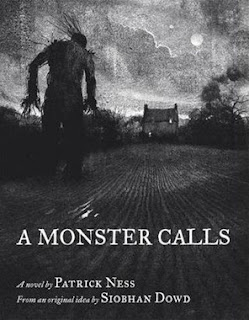 A Monster Callsis now in paperback!


I don't know how or where to begin writing about this breathtaking, heartbreaking, perfect new book. The start would be the best place, I suppose. As Patrick Ness says in his Author's Note from the beginning of A Monster Calls,
I never got to meet Siobhan Dowd. I only know her the way that most of you will - through her superb books. Four electric young adult novels, two published in her lifetime, two after her too-early death. If you haven't read them, remedy that oversight immediately. This would have been her fifth book. She had the characters, a premise, and a beginning. What she didn't have, unfortunately, was time.
Ness goes on to say that he felt trying to write a book mimicking Dowd's voice would have been a "disservice to her, to the reader, and most importantly to the story... But the thing about good ideas is that they grow other ideas... I felt- and feel - as if I've been handed a baton, like a particularly …
Post a Comment
Read more 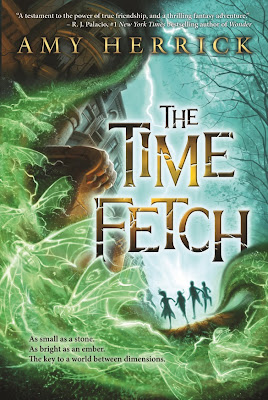 The Time Fetch by Amy Herrick, besides being a fantastic book, also happens to be one of the first books to be published by the brand new imprint Algonquin Young Readers. I want to take a paragraph here to tell you about Algonquin Young Readers, the recently created arm of Algonquin Books, publisher of acclaimed best selling books for adults such as Like Water for Elephants by Sara Gruen. Last year I had the pleasure of hearing Elise Howard, former senior VP at HarperCollins Children's Books and editor of Neil Gaiman's Newbery Award winner, The Graveyard Book, and now the originating editor and publisher of Algonquin Young Readers, talk about the flavor and feel of the kind of books she wants to make up her list, which is debuting with two YA titles, two illustrated chapter books and one middle grade novel, The Time Fetch. Howard hopes to publish books that have "characters that I want to spend hours of my life with" and also "might entice a casual reader to be…
Post a Comment
Read more 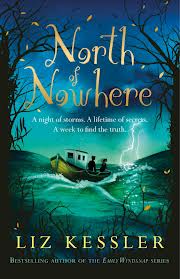 I am embarrassed to say that the only books by Liz Kessler that I have read are her stand alones, like A Year without Autumnand here newest book, North of Nowhere. This is despite the fact that, when I was a bookseller, I watched hugely successful series, Emily Windsnap, about a girl who accidentally learns she is a mermaid during a swimming lesson, and her Philippa Fisher Trilogy about an ordinary girl who discovers that the new girl at school, Daisy, is actually her fairy godmother - or godsister, since they are the same age, fly off the shelves. Believe me, these books are on my to-be-read pile. But, until I get to them, I am thoroughly enjoying everything else that Liz Kessler writes! Based on A Year without Autumn and North of Nowhere, I'd say that Kessler has a distinct gift for writing fantasy that is squarely grounded in the real world. By that I mean that she creates rounded characters with a depth of details, like the quiet, order-loving, responsible Jenni Green, who fa…
Post a Comment
Read more 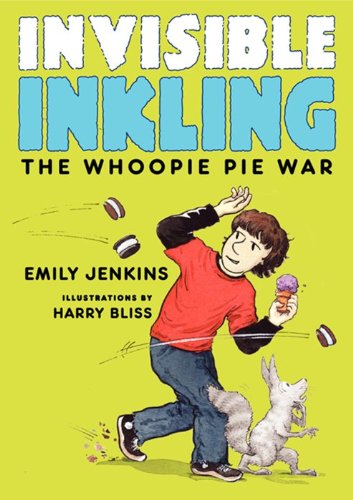 Last year I reviewed Dangerous Pumpkins, the second book in Emily Jenkins'Invisible Inkling series, illustrated by the marvelous Harry Bliss. What first drew me to this book is Inkling himself. Inkling, invisible to everyone, is a bandapat, native to the Peruvian Woods of Mystery, or possibly the Ukranian Glaciers or perhaps the Redwood Forests of Cameroon. Inklinkg likes to mix things up. Inkling also needs lots of vitamin A and is therefore a lover of squash, especially pumpkin. In Dangerous Pumpkins, this proved almost disastrous as it was Halloween and pumpkins were everywhere and Inkling didn't quite understand that he couldn't eat every single one he saw. But the thing I really love about Jenkins and Bliss's books are the readability, page length and creativity. If you have a kid who has moved beyond chapter books like Magic Tree House but is not quite ready for the 300+ page fantasies that predominate, then these are the books for your reader!

Bluffton: My Summers with Buster, written and illustrated by Matt Phelan, 240 pp, RL: 4 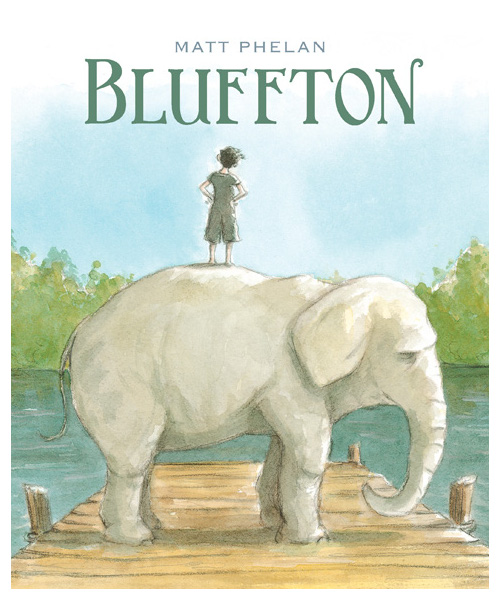 Bluffton: My Summers with Buster is the newest graphic novel from Matt Phelan. This is Phelan's third graphic novel, The Storm in the Barn and Around the World, being the first two. All three of these books are set in the past, featuring historical events and figures who left their mark on the world, if not changed it outright. With Bluffton, Phelan tells a more personal story as he did in The Storm in the Barn, with a fictional protagonist watching history unfold around him. It's the summer of 1908 in Muskegon, Michigan, the summer they arrived.
The text, and even the plot itself, in Bluffton is sparse, Phelan's illustrations doing the work of telling the story, setting the scene and evoking a feeling. Henry, the son of a hardware store owner, watches as the vaudevillians arrive to spend the summer in Bluffton, a nearby town on the edge of the lake. Henry wants to follow the laughing, colorful people, the elephant and the boy who does backflips, but the trolley is full. E…
Post a Comment
Read more 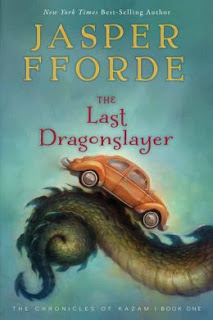 The Last Dragonslayer is now in paperback, and with a cool new take on the original cover art!!


The Last Dragonslayer by Jasper Ffordeis the first in the Chronicles of Kazam, his new series for young readers. Many years ago I gleefully gobbled up his debut adult book The Eyre Affair, the first book in the Thursday Next series. Thursday Next, daughter of Wednesday and Colonel Next, is a literary detective living in a parallel universe where an alternate history is playing out. Next has a pet dodo named Pickwick (cloning is a common, although bringing back the wooly mammoth was probably a mistake) and lives in a world where literature is the most popular form of entertainment and capitalism and big business run rampant. Thursday's Uncle Mycroft has invented the Prose Portal, a device that lets everyday people enter works of fiction, and Hades, a criminal mastermind has used it to steal an original manuscript by Charles Dickens, ultimately threatening to kill off literary characters. …
6 comments
Read more
More posts

Under Earth, Under Water by Aleksandra Mizielińska and Daniel Mizieliński is their fourth book I have reviewed here and their fourth book with the marvelous Big Picture Press, a publisher of oversized, highly illustrated, gorgeous books who believe that books should be "visually intelligent, surprising, and accessible to readers of all ages, abilities and nationalities." BPP definitely achieves this with every book they publish and, if you are a book lover, you will want to seek out all their titles. Under Earth, Under Water will appeal to anyone who likes to look inside things and understand how things work.
With Under Earth, Under Water, the Mizielińskis, who have an illustration style that is filled with tiny details and a unique palette, take readers on a detailed journey, from the top of the page to the bottom, over and under land and then sea. The endpapers serve as the introduction and table of contents, with images scattered across the spread, page numbers connecting …
Read more

Princess Princess Ever After by Katie O'Neill Published by Oni Press Purchased at The Strand Bookstore
Princess Princess Ever After is hilarious, fast paced - both in plot and dialogue - and groundbreaking. I can't believe how much O'Neill packs into 56 pages and how absolutely commonplace this story about two princesses who fall in love is. Back in 2012 when I reviewed Drama by Raina Telgemeier, I buried the fact that there are gay characters, questioning characters and a kiss between two boy actors, one of whom is playing the part of a girl character. As a bookseller dealing with a public (in my small, right-leaning-heavily-Christian city) that I knew would not be comfortable with this, I worried that my readers might share the same feelings of discomfort surrounding LGBTQIA+ characters in kid's books. It's so exciting to me that today I can write about a book like Princess Princess Ever After and, while I am still giddy that diversity in kid's books is growing,…
Read more

How to Choose Age Appropriate Books for Advanced Readers remains the most read post on my blog since I wrote it in 2012. Because of this, I have cleaned up this post, tightened the writing and added in any pertinent information that has come about since it originally ran. When I first started books4yourkids.com in August of 2008, I was scrambling for content, finding my purpose and my voice and not always doing my best writing. How to Choose Age Appropriate Books for Advanced Readers was one of the first articles I wrote and, as a bookseller and a book reviewer, and now as an elementary school librarian where I have gone from working with kids reading well beyond their grade level to kids reading well below, this philosophy remains my organizing principle and central focus when reading and recommending books to parents and children.

In the interest of my mission and the attention this article continues to receive, I have updated and expanded this article and included a guide to using …
Read more